Firestopping In Construction and Buildings 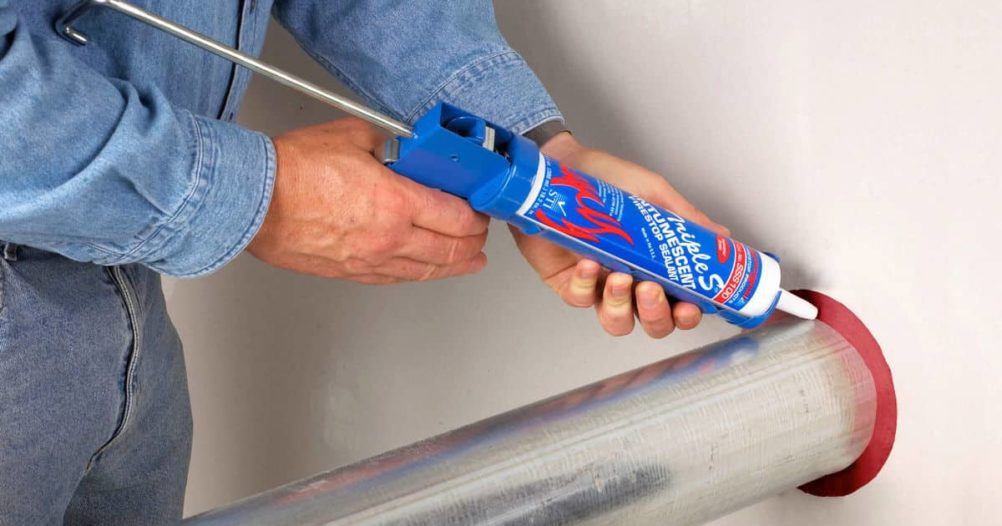 You are here: Home / All Posts / Firestopping In Construction and Buildings

One of the first projects I was on the architect asked us if the firestopping material was installed in the movie theatre. Because I was new I had no idea was this crucial element to the building life safety systems were. So what exactly is firestopping and how is it used in construction?

Through my investigation I discovered that firestopping can be a range of materials that are installed in joints within walls, ceilings and floors that have a fire rating to slow the spread of fire throughout a structure.

There are many different forms of firestopping so let’s jump right in and review where it is found, types of materials, how it’s detailed and what it actually does.

Where Can I Find Firestopping In A Building?

These are just a few of the examples of where it can be found. The important thing to remember is that any time there is a room that requires a fire rating firestopping is most likely present to seal any of the cracks and openings going in and out of the room.

How Can I Identify Where It’s Required?

A fire separation plan is typically prepared by the architect and defines, based on the building code, where fire rated walls occur. It identifies the separation and the required rating by highlighting them on a floor plan.

By reviewing which partitions have fire ratings you can easily determine which walls and slabs require firestopping to ensure the continuation of the fire rating.

What Does Firestopping Do?

Firestopping is considered a form of passive fire protection in a building. It’s intention is to help slow the rate of fire throughout a building by containing it within a room. But what exactly does that mean and how is it done?

The materials used in the assembly are all governed by UL / ULC laboratories in both Canada and the USA. Products going into the assembly need to be designed together (ie insulation and sealant material) and must be tested to provide the rating. Because materials melt at different levels it’s important that they be selected and designed to survive in high temperatures.

According to the Firestopping Contractors International Association materials in a building that are unrated start to melt at 300 degrees farenheit. By introducing new materials it helps slow fire penetration.

Firestopping assemblies have been designed by companies throughout the world. Some of them are special products others are a combination of products to make up an assembly.

One of the most common types of firestopping assemblies involves installing mineral wool rated insulation in the cavity space to stop the spread of fire and installing a smoke seal on both sides of the seperation. Mineral wool insulation does not melt until around a temperature of 1000 degrees farenheit (compare that to the 300 noted above). By applying the smoke seal to both sides of the penetration you ensure it is always in tact on the opposite side of the wall of the fire.

Many companies that provide firestopping materials will do designs with their products for you and provide visual guides on installation that will comply with their designs. As an example – USG one of the major drywall suppliers provides a catalog which includes details on how to seal pipe penetrations, tops and bottoms of walls and many other common construction situations. While this isn’t a requirement it is designed to help teams simplify their on site work.

Other examples of firestopping include more module products that are engineered and designed to be installed in certain situations without the need for complicated installs.

Expansion Joints – rated expansion joints that are prefabricated exist on the market. Rather than require complicated insulation and smoke seal these are rubber assemblies that are simply installed in a joint. As an example Emseal offers these.

Cable Penetrations – rather than install a custom joint around cables or pipes vendors have started providing manufactured products that can be installed on partitions to provide an equivalent rating. While these products are typically much more expensive they do provide an ease of installation and cleanliness. Hilti has many different cable penetrations available.

These are just two examples, there are hundreds of products available on the market for many different applications. A simple google search or asking an industry professional will help you to discover them.

What Materials Is Firestopping Made Of?

Because of the importance of firestopping and it being part of the fire protection system within the building it’s important that the system be inspected and tested before the work is completed and or covered up.

The first step in the process is that the location of all joints is defined and designed by Local, State and National building codes. Other associations such as the NFPA (National Fire Protection Association) also have guidlines with respect to the design of assemblies.

Once that’s been completed it’s important to select products which are designed in accordance with industry standards. The products must comply with UL and ULC standards (in North America). Each product must be tested to ensure conformance. Prior to application you need to ensure that your products aren’t expired.

As we I noted above – assemblies are designed by companies and certified by the ULC. That being said you may run into instances where a typical design just doesn’t work. I had this occur on a past project – the expansion joint was an atypical design. When this occurs you may need to engage an engineer to prepare an engineering judgement for you.

What is an engineering judgement?

Through my project experience I have required a number of these. An engineering judgement is where a typical assembly design does not exist. Because your specific application is unique an engineer will review existing assemblies and materials and prepare a detail or proposal for you that meets the code requirements of your site specific design.

Because an engineering judgement is unique to your project the building department may want a copy. Ensure that you keep a copy readily available.

Once you’ve completed the work, you’ll need to ensure your local building inspector is reviewing the firestopping application. If the work is behind drywall you’ll want to bring them in before you close the wall. If the application is out in the open you can bring them in at a regular interval to inspect the work prior to turnover of the building.

Besides the building inspector, you may want to bring in a manufacturer representative to ensure that the application is in conformance with their details. This ensures that in the event of an incident and / or product failure the applicator cannot be blamed.

Tips for Contractors and For Firestopping

There are a few general tips for contractors looking to ensure that the firestopping scope of work is covered in their project:

There are many other great pieces of advice regarding this scope of work. But the most important is really just to pay attention to the details for firestopping and don’t overlook it.

Firestopping is a critical part of any project and requires attention to ensure it is both captured within a trades scope and installed properly in the correct locations. Make sure that you pay attention to the firestopping details on your next construction project!

How has firestopping been applied on your projects? Let us know below in the comments and include any lessons learned.

Essential Construction is a construction technology company located in Ontario Canada. Founded by a group of experienced construction professionals our mission is to improve the construction industry through the sharing of information.

Our mission is to promote sharing within the construction industry.